In an era when models went from clothes hangers to supermodels, designer Ralph Pucci transformed the mannequin from clotheshorse to art form. In collaboration with artists, designers, and models (Patrick Naggar, Ruben Toledo, Anna Sui, Veruschka, Christy Turlington…), Pucci gave mannequins character, verve, and the ability to make a fashion statement, clothed or not. As a brand that values innovation, art, and creativity, Joe Fresh is thrilled to share this exclusive installation in our New York flagship store.

“The range of work that Ralph Pucci has created is so impressive, and the design flare he has brought to mannequins is brilliant,” says Joe Mimran, Creative Director of Joe Fresh. “I have known Ralph for many years and when I saw these amazing mannequins, they reminded me of works of art. I knew we had to find a way to show them to the public in our Joe Fresh runway clothes.”

I created the copy for The Great Bears holiday installation at Joe Fresh's New York flagship store. I also interviewed the Canadian artists and Joe Fresh executives and developed the copy for the video that appeared on a video wall alongside the installation.

The Great Bears: The Making of “Ursa Major”

“There is something so altruistic about art. We’re in such a commercial, fast-paced business that the juxtaposition of art to fashion cleanses the soul, invigorates the mind, and gets you thinking about trends and color in a really interesting way.” —Joe Mimran, Creative Director, Joe Fresh

“We loved this sculpture and what Moss & Lam stand for as a company: they respect art and design, they’re creative, and they think outside the box.” —Andrew Shannon, Vice President of Joe Fresh Stores

“Edward wanted to create something accessible, a spectacle, something positive and very immediate. I’m often drawn to animal imagery, as part of a bigger concern I have of how we relate to the natural world.” —Deborah Moss

“First we had the idea, the proverbial drawing on a napkin. We always start with sketches. Then we used a computer rendering program to look at scale and proportion. Then it has to go back to the hand.” —Moss & Lam

“We love the way Styrofoam shows the process of carving, from blocking out a shape to roughing it in to finessing it. We wanted to leave that process visible.” —Moss & Lam

“I was mesmerized by the bears when I first saw them. Polar bears are such iconic creatures, particularly for a Canadian brand.” —Joe Mimran

“We’re not just selling clothes; we’re selling an idea that is sometimes bigger than the clothes. It makes our business a lot more meaningful and a lot more fun.” —Joe Mimran

“What’s inside the idea of a bear? It’s almost like they contain the universe. We struck on the idea of an orb representing the earth and the other stomach contains a small representation of the bear in the Ursa Major constellation.” —Moss & Lam

Animals were used as the original inhabitants of the constellations because of their poetry and their magic to people.

The seven brightest stars of the constellation Ursa Major (also known as the Great Bear) form the Big Dipper.

Approximately 1,650 Swarovski crystals were incorporated into the sculpture.

“We chose to use the crystals because they were almost like little gems, little stars inside these massive creatures, and we liked the juxtaposition of the common Styrofoam and the more luxurious crystals.” —Edward Lam

“We want to use the flagship store as a backdrop for these incredible installations. When people see these giant bears, it’s unexpected—it’s not a Christmas tree or snowman. We’re hoping to create memorable moments as well as share art with a wider audience.” —Andrew Shannon

“Joe Fresh has made a real statement with that space on Fifth Avenue. It says, ‘Wow, we’re here!’ I think the bears have that quality too. ‘Hey, we’re here. Enjoy us. Love us.’” —Deborah Moss

Length of time to build the Great Bears: 2 months

Weight of the Great Bears: 300 pounds

Number of giant foam polar bears on the planet: 2 (as far as we know) 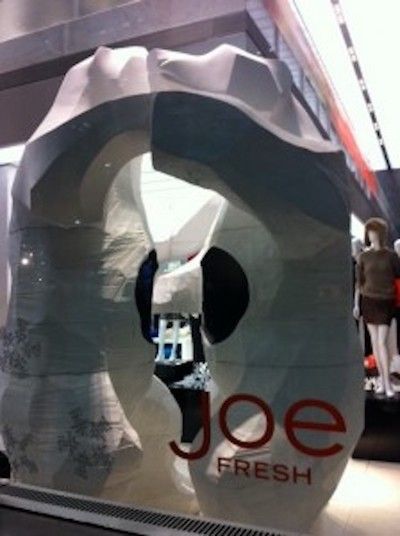