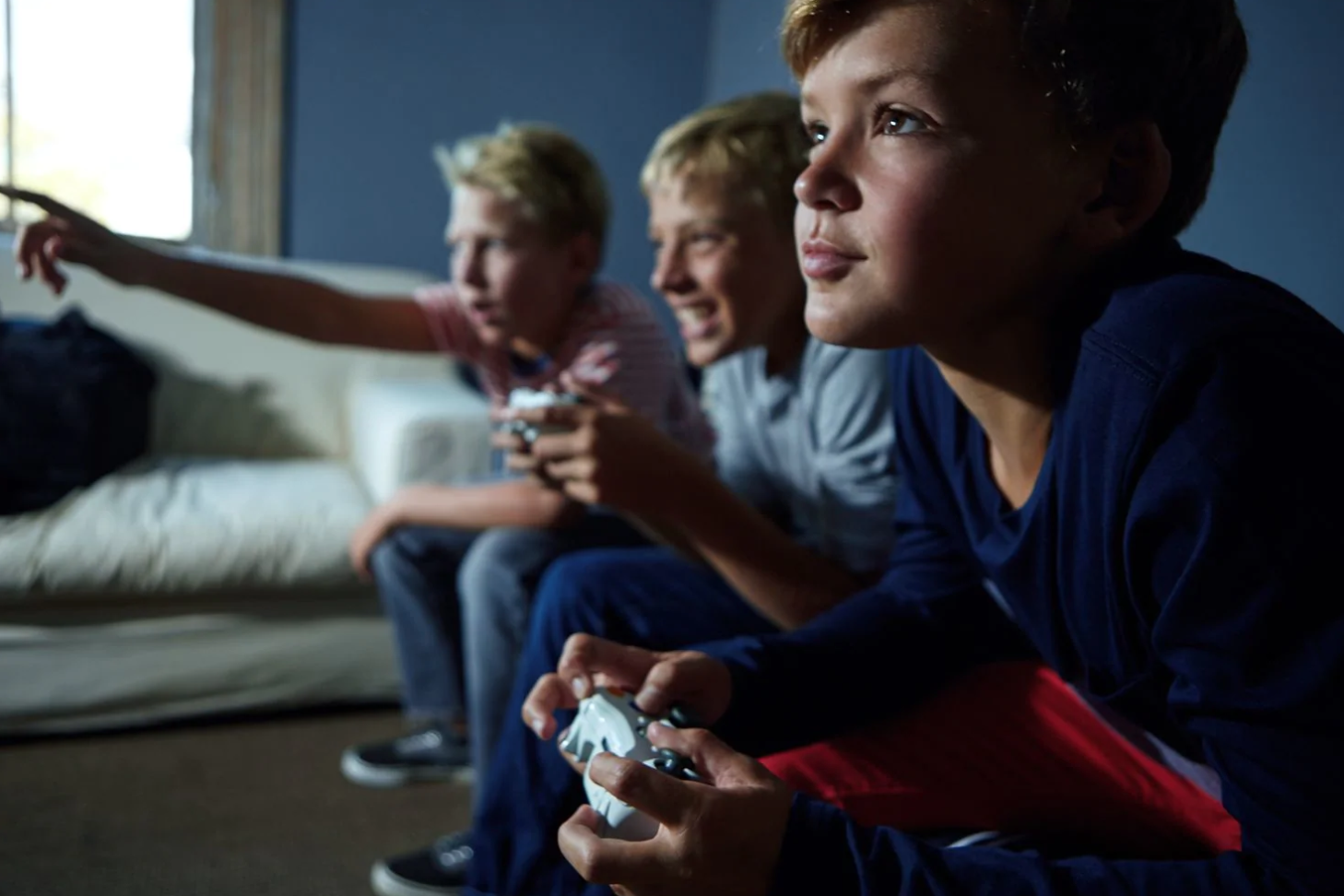 It was 10:30 p.m. on New Year’s Eve 2018. I found three boys, rolled into fetal positions near two sets of outlets in my bedroom. Their eyes appeared rabid as their fingers worked furiously on cellphones they gripped like straws over plates of white lines at Studio 54 in 1978.

The analogy isn’t hyperbole; some experts say video gaming affects the frontal cortex and raises dopamine levels just like drugs or sex. Considering their all-consuming obsession and the lack of social skills developing in our little screen junkies, we may not have to worry so much about the latter. Until they move back home into the basement, with their Wii and virginity, in their late 20s.

Researchers Patrick Markey and Christopher Ferguson reassure us the dopamine surge from gaming is similar to that from eating a bowl of ice cream. But the fifth edition of the Diagnostic and Statistical Manual of Mental Disorders (DSM-5, published in 2013) — psychiatrists’ bible — includes “Internet Gaming Disorder” as a proposed condition to be included in the guide, pending further research. The American Psychiatric Association’s news release describes the disorder this way: “The ‘gamers’ play compulsively, to the exclusion of other interests, and their persistent and recurrent online activity results in clinically significant impairment or distress. People with this condition endanger their academic or job functioning because of the amount of time they spend playing.”

The looming image of my 20-something man-child, pale and unemployable, ensconced in our unfinished basement, grows.

“Enough, boys! Turn off the phones and come downstairs,” I scolded. Digits continued at a frenzied pace as gunfire rang from their phones. “I’m serious! That is so disturbing.” Some squirming. Whining. “Mom, c’mon!” One boy didn’t look up. I went downstairs for reinforcements.

Another mom managed to drag them from their bunker. They trudged down the stairs, scowling. And then the adults in the room heard one of the boys exclaim: “Let’s play ding dong ditch!”

Some exercise, fresh air out in a howling rainstorm, disturbing the neighbors. Fantastic! The adults were thrilled.

“Remember when there were actually repercussions from pranks like that?” reminisced one dad. “When we’d never dare admit to our parents we were ringing doorbells and running, unless a cop hauled us home, shaken and remorseful?” Sigh, yes. But now? Anything that gets them off their devices, especially old-school fun, is like one step forward in a 12-step recovery program.

After the kids, ages 8 through 12, scampered out into the night, we talked about the temper tantrums, moodiness and impatience that plague our children and, in turn, us. When we were 12, our parents might blame it on hormones, but now this plague starts earlier and is too obviously correlated to phone acquisition and tech timeouts. I recalled my own Centipede addiction, but it wasn’t enabled by a gadget I carried in my pocket. I had to be home on my Atari or at the roller rink — where whizzing around in my pom-pom-adorned skates was still more fun than shooting space ships. The tech developers had not perfected the addictive potential of their games back then, plus I had to drop a quarter each time I indulged.

But now there are psychologists dedicated to treating not just children but adults, too, for gaming addictions. The Diagnostic and Statistical Manual of Mental Disorders notes that gaming must cause “significant impairment or distress” in several aspects of a person’s life. The symptoms of proposed Internet Gaming Disorder?

An Internet gaming disorder diagnosis would require experiencing five of the symptoms within one year. A study published in the American Journal of Psychiatry in March 2017 concluded that only 0.3 to 1 percent of young adults would qualify for a diagnosis should the disorder become official. A few parents in my ‘hood might argue that the number of preteens at risk is higher than that. And the teenagers, well, just read this Washington Post article to learn how Call of Duty can turn real life with a teen into a war zone.

With all of that in mind, the pranks of generations past seemed not only innocent but imperative.

The pack of kids on New Year’s Eve returned 30 minutes after their ring-and-run mission, soaking wet and gleeful about their multiple victims. No one called the police. No one touched a phone. Their cheeks were rosy. Their eyes twinkled like Santa’s. I’d call that a win.

It was ambitious, but we then talked the kids into a game of charades. Could we actually keep them unplugged from now until 2019, a full 60 minutes away? With the New Year’s Eve broadcast in the background, 11 of us — adults and youths — gathered in our living room and engaged in some good old-fashioned fun. We used our imaginations, made eye contact, contorted limbs, breast stroked across the rug, gestured excitedly at those close to reading our minds and bodies, risked embarrassment, laughed with abandon, and didn’t need to pay AT&T or use the Internet for any of it.

After animated performances of “yacht,” “whale,” “mountain” and “close but no cigar,” I convinced the most reluctant boy to help me act out “lamp.” He lit up just a bit under his arm lampshade. I imagined I touched a part of his brain that his technology couldn’t. Or maybe he just felt he was one charade card closer to getting his phone back.

Either way, my 2019 resolution is to keep brightening our days in ways screens can’t — and remind the kids to run like the dickens from those doorsteps.

Jill Johnson is a writer and mom of four living in Connecticut. When she isn’t writing or telling her kids to get off their phones, Jill (@modelingmentor on Insta and FB) advises models, and scouts for new faces on her site: Modelingmentor.com/blog.

Follow On Parenting on Facebook for more essays, news and updates. You can sign up here for our weekly newsletter, join our discussion group about parenting and work.

Forget the screens. Try one of these games to play with kids instead.

Why do my kids spend hours watching millennials play video games on YouTube?

Everything parents need to know about esports